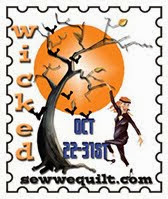 I wish I had created more projects for the Blog Hop but there have been a few "Wicked Storms" that have attacked my family as of late, the kind that get hold of you heart, throat, and stomach, and don't seem to want to let go.  All my Mama friends out there know what I mean....those times when you simply have to
LET GO AND LET GOD"
I'm not so good at letting go.
I've begun a daily Prayer Journal 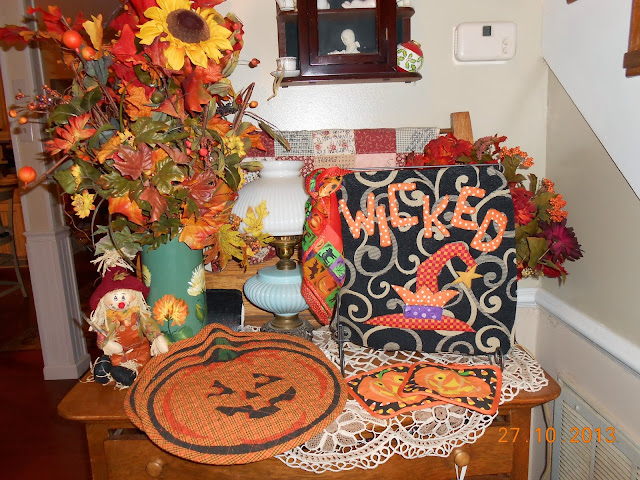 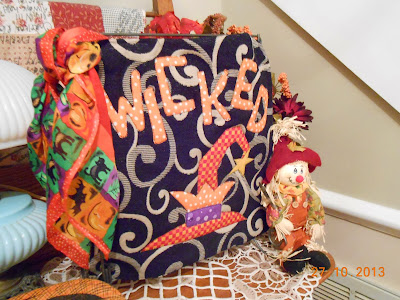 A nice Mini-Quilt for my stand
APPLIQUE METHOD 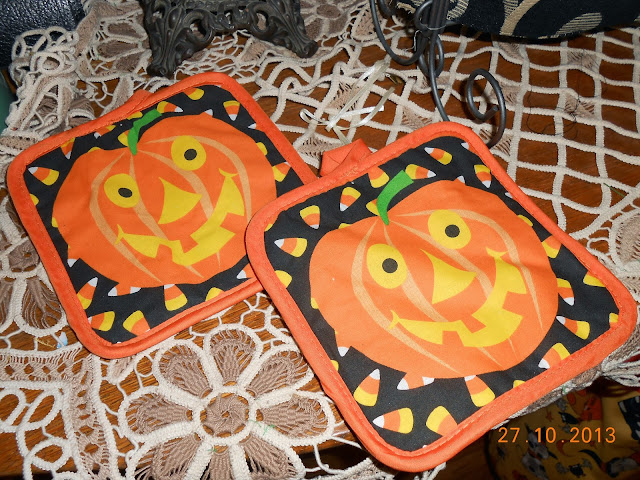 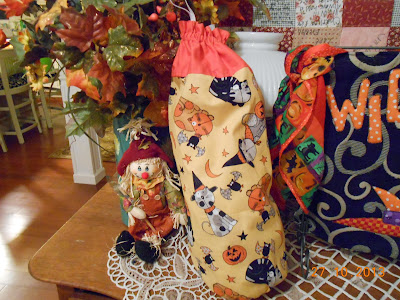 A simple Bag-It for the Season 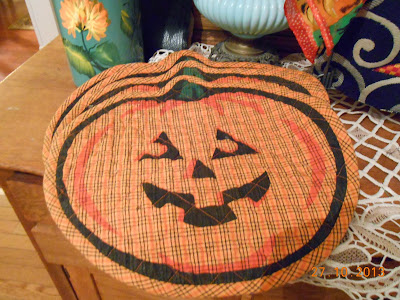 All In All, sewing each project was good therapy!  Please go visit my fellow Wicked creators for some lovley wicked ideas.  A Big Hug to Madame Samm and Cheerleader Wendy!! 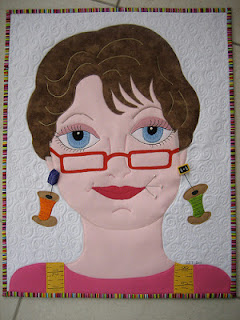 THE REST OF THE STORY... RIOT STORIES,PART 1

RIOT STORY...Part 1
It was 1971, I was a freshman at Marshall University, Huntington, West Virginia.  The plane crash of Nov. 1970 had killed the entire football team/boosters/coaches (75 total), the city was still in mourning, and the Viet Nam war was raging, All but for a naive small town WV girl away from home for the first time, life held innumerable possibilities............plus, I had a Super Size Crush on a 6'4" Alabama boy who played Offensive Guard on the Young Thundering Herd Football Team.  Bama, as we called him, had borrowed a dime from me during Freshman Orientation back in July to call his Alabama girlfriend.  The dime for a pay phone may be a clue as to how times have changed.

Angered by drug raids in the campus area during the early 1970s, students rioted in the streets, including incidents of rock throwing, breaking windows in nearby businesses and setting fire to garbage dumpsters. Here, police in riot gear are lined up outside the main gate at 16th Street and Fourth Avenue.

The real story begins with  our local police Dept. having  just come back from "Riot School" and they were anxious to try out their new found skills and new "toys"...check out those billy clubs. Armed with Big Ol Armored Shields, cans of Tear gas laced with pepper spray and students anxious to get on the local News, you had a situation primed for trouble.

Back in my Dorm Lobby, a group of us ( me and Super Hunk Bama) were playing pool when some frazzled on-edge students came rushing in to tell everyone about the Riots happening in front of the Student Union.  Now you take some small town kids who had only seen a real riot on the news somewhere in California or Detroit, a Saturday night and a few beers MAY have been consumed...not by me...just sayin...and you have the recipe for TROUBLE.

Tractor Man or Bama as he was known back then said, "Hey, let's go watch the riots!"  Who was I to be a party pooper so...off we went "to watch the riots" or more accurately, find Trouble!

Uh OH, boy did we find it...........or I should say IT FOUND US!!!  TROUBLE that is!!!  Take a group of innocent on-lookers, (aka...college students standing on the street corner of the University Student Union), a freshly minted Riot Squad, rumors of students throwing rocks somewhere on campus and some Lone Ranger running up BEHIND the ON-LOOKERS in an attempt to throw a bottle to make it look like the ON-LOOKERS are the Rioters ...........well, let's just say IT Might Look Like You Have the Beginnings Of A Riot on Your Hands!!!

I never knew my short little legs could run so fast but when a local Police Militia with their Riot Squad Diplomas shoot tear gas canisters at you, the body's adrenalin takes over and you find yourself in an out-of-body experience.  It's as though I'm in a dream running from police with my new boyfriend, Bama, dragging me by the elbow yelling for me to " HURRY, they're shooting at us"  We break off from the original group to find a row of hedges to hide behind.  We duck down, hold our breath, and watch the riot squad march past us following the larger group.  The police pass, we breathe a sigh of relief, and as we stand up to walk back to the dorm in the Opposite direction, all I hear is, "There they are!"
WHO?   Me???
Bama??
OH NO!!

Evidently, we were spotted and once again mistaken for "rioting students".  Once again, my short legs take off in hyper drive.  Bama says  "follow me" so I follow him along a back pathway to the nearest dorm, South Hall.  When we reach the SH, the University Police have the dorm on lock-down so we have to find a way to let them know we're the good guys and to let us in.  By this point, the entire campus and the entire city have erupted into huge unrest, bottles thrown, fires in the street, tear gas, total chaos.  The Local news is filming for the 11:00 news and all I can think about is my parents watching and worrying about me back in my small town 4 hrs. away from all the unrest.  Little did they know at the time their straight as an arrow daughter was right smack dab in the middle of the whole Hot Mess!!

At this point, We hide across the street from the South Hall entrance hoping to run for the door without the local City Police (who are patrolling the street) from seeing us as well as hoping we can explain quickly enough for the Campus Cops to let us in before the next squad car passes by.  At some point, we decide to just run for the door, yelling and screaming for the security guard to OPEN THE DOOR, OPEN THE DOOR, OPEN THE DOOR!!!!.  We get inside in the nick of time RIGHT BEFORE the city police stop their squad car, run up to door and BANG, BANG, BANG.... demanding to be let in!!  Thank goodness for our Campus Cops who wouldn't open the door! The City Police Leave!!!  Whew!

FINALLY, we're safe!  Hearts are pounding, adrenalin flowing...We could have made the wise choice to call it a night, walk across the street to my home dorm, but NOOOOOOOOOOOOOOOOOOOOOOOOO! .......... since we don't know when to let well enough alone, our entire group of approximately 20 wise acres run up the fire escape to the roof of the dorm so we can WATCH the rest of the riots all over campus.  At the height of 7 stories, we had a pretty good vantage point.  Aaah, the ignorance of youth.

HOWEVER.....REMEMBER those city policemen the campus cops/security guards wouldn't let inside the dorm???
Evidently they didn't like being told NO, so they came BACK
only this time with REINFORCEMENTS!!!  So here we are, a bunch of 18 yr. old numskulls who think everything is A-OK , watching the events unfold below like we're watching a movie
When...Like a News Flash
we realize the Police Squad Marching Loudly up the outside Fire Escape steps are not coming to put out a fire but  they're coming after US!!!  Oh yes, some one heard over a police radio that there was a group of Rioters on top of South Hall!  South Hall???  That would be US!!!

SO...as the riot police are marching UP the fire escape, WE are RUNNING DOWN the fire escape to the nearest open fire escape door which wasn't till the 4th floor.  The police were approaching the 3rd floor when a campus cop opened the fire escape door to let us in.  We no sooner shut the steel door till we hear BANGING and BIlly Clubs Beating the door demanding to be let in.  At this point, the Campus Security Guard yells to the police that they have no jurisdiction on campus and to LEAVE IMMEDIATELY!!!!

By this time, the dispute becomes an issue between local Campus Cops and Local City Cops!  We use this time to disperse and flee back to the safety of our own dorms.  We get back just in time to watch the Riot coverage on the 11:00 News.  I get a message that my parents have called (era of No cell phones).  I call to reassure them I'm safely in my dorm and have been All Evening!!!  cough cough wink wink

Hey, Man
LIKE...It's...Today..
Ya Know..
TWISTIN' WITH THE 60'S
She's still a WIP (work in progress)
I haven't blanket stitched all the edges but she
had to come to the party even though she wasn't quite ready for Prime Time 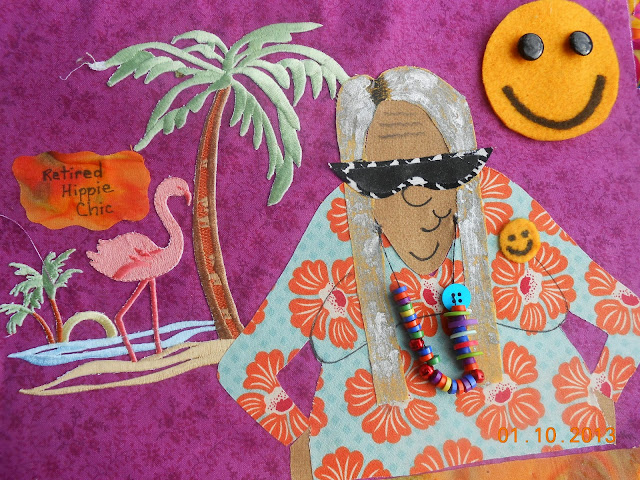 ONLY THIS TIME,
SHE'S ONE
FINE
RETIRED 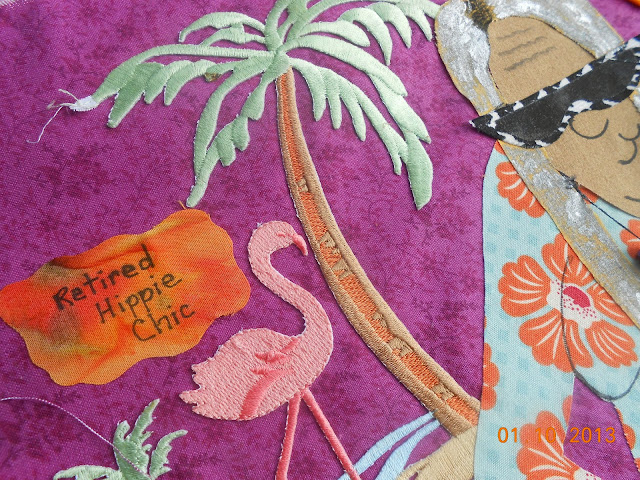 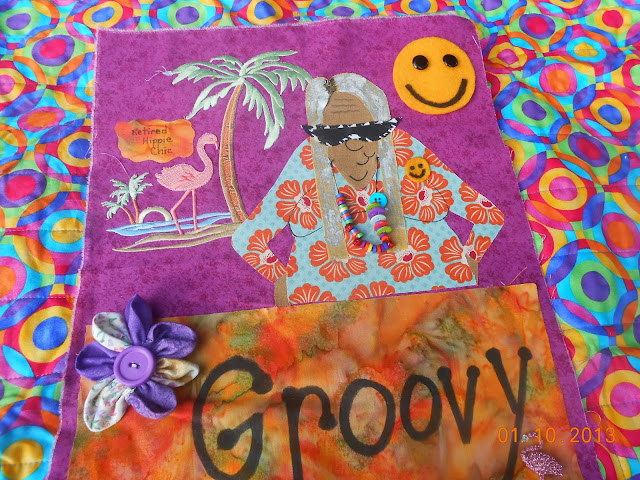 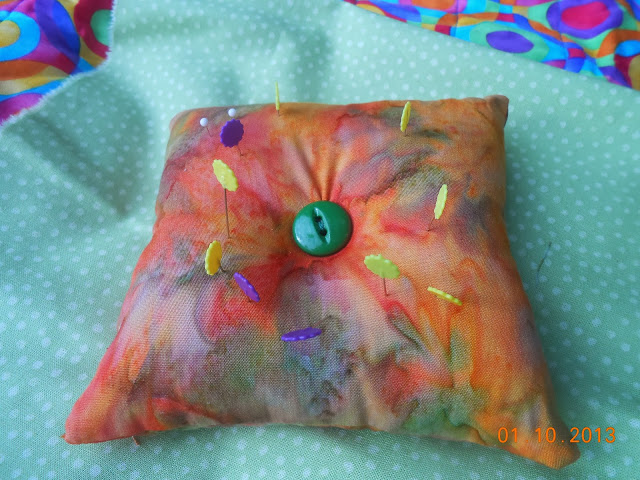 PART OF THE
UP-TIGHT ...OUTTA SIGHT
THREAD CATCHER PROJECT
(CHECK OUT THE TIE-DYED NOTEBOOK I FOUND IN MY STUFF) 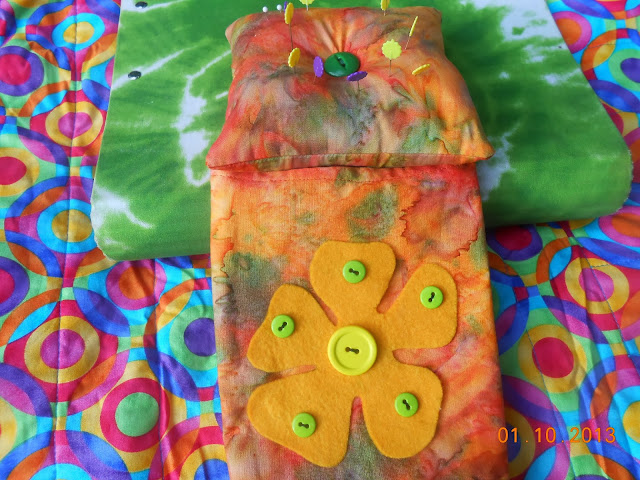 MINI QUILT
USING
BATIKS
(The pictures were colored w/ crayons and colors set with heat from my 4th iron in less than 1 yr.) 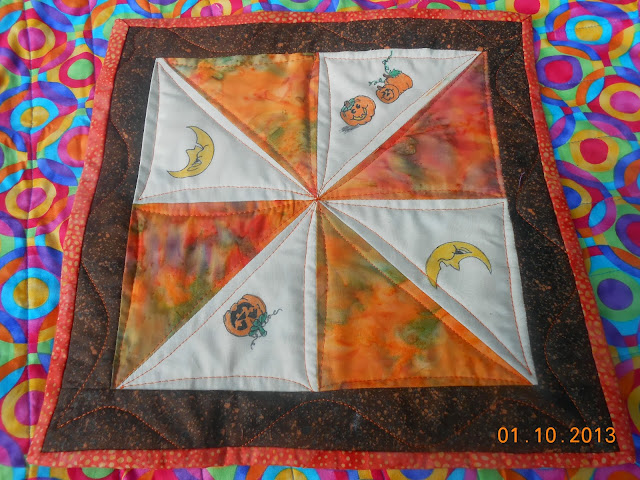 BACK OF MINI QUILT PROJECT 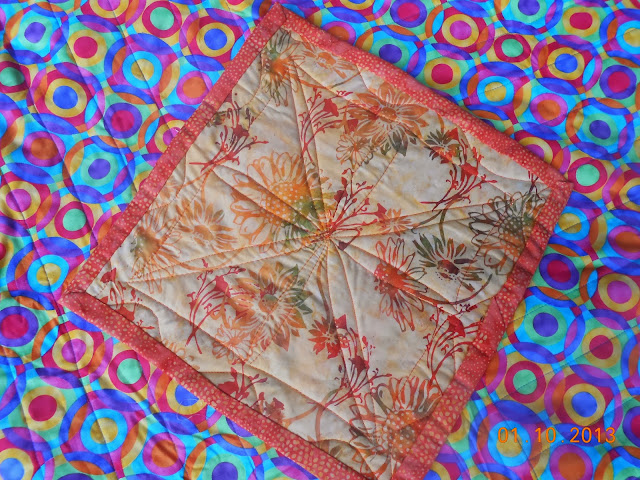 Don't have a Give-Away this time around but I do have a great story to tell about my days in the 60's and early 70's...RIOTS???  I WAS JUST WATCHING THEM, OFFICER, HONEST....

You'll just have to wait for the Rest of The Story as Paul Harvey used to say...like I've always said, my stories are never dull!!!! 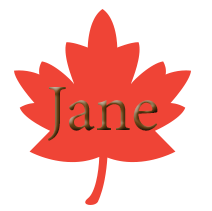