January 27th 1973
I married my college sweetheart, best friend, the person who makes me laugh, father of my 3 children, PaPaw to our 5 Grandchildren and all around Great Guy! 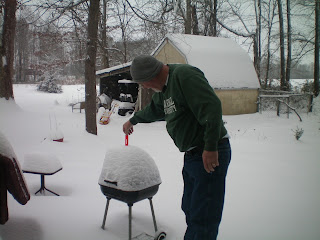 Future Weather Forecaster
I know, it's a little belated but last week was one of those weeks where I had to "Get the Ox out of the Ditch".  That is an old Biblical reference for those not familiar, which means there are times when you "just gotta do what you gotta do".
The Love Story
We were sophomores in college who planned to get married in May of 1973 once school was out for the summer.  But as young love goes, we went apartment hunting with our best friends to be, found an adjacent VACANT apartment and thought, "Wouldn't it be great to live here and not have to wait till May to get married?"  To the heart palpitations of our parents, we made the rash and immature decision to get married at our Campus Christian Center with ONE WEEK to prepare and a $300 budget!!  That was 38 years ago and as CRAZY a decision as it was, God in His infinite wisdom AND sense of humor has kept us together through thick and thin, better and for worse, Richer and for Poorer(mostly poorer) sickness and in health, and till Death Do Us Part!!
How did we meet, you ask???
WE can thank the old fashioned PAY PHONE!!  Both of us were on campus of MARSHALL UNIVERSITY (the University featured in the Football Movie, WE ARE MARSHALL) for freshman orientation.  Mr. H. aka...#1 Husband, Mr. Football, Mr. Haney from Green Acres, walked over to a group of us girls one evening asking to borrow a DIME to call his girlfriend back in Alabama!  A DIME???  PAY PHONE???  Boy, does that date us or what???

Let me tell you, Mr. Football was one Cutie Patootie!  In todays' vernacular, he would have been described as a "hottie", " "hunk", etc...I started digging furiously in my purse for a dime so I could be the one to give him the coveted DIME!!  All the time, thinking to myself, "That Alabama Girlfriend is going to be long gone if I have anything to do with it".  I WON!  I gave him the dime, found out he was on the football team and right then and there set my sights on Mr. Football and never looked back.
WELL...THAT was 39 1/2 yrs., 3 children, 5 Grandchildren, a 600 mile move back to Alabama, and lots of laughter, tears, and Love later!!

Believe it or not, the movie is about MY HUSBAND and his 1971 Young Thundering Herd football team!  IN Nov. 1970, a plane crash into the side of a West Virginia Mountain on a rainy foggy night, killed all 75 passengers...all 75 members of the Marshall University Football team, boosters, Coaches, Pilot, & Flight attendants.  The decision to continue the football program and the recruiting all over the nation to replenish and ENTIRE football team with 17/18 yr. old young men is the heart of the story.  The movie stars Matthew McConaughey, Matthew Fox, & January Jones.  It is a GREAT and TRUE story that makes a Great Family Movie Night!!
#1 Husband and I are in many of the crowd scenes although you can't see us.  Only the two of us can see where we are but it was sooooo much fun being part of the movie production, filming, and subsequent Premier Night!!
Well...That is our Love Story, for better or for worse but mostly BETTER!!
We're still in love in 2011 and hope we have many more years together!
What is YOUR LOVE STORY???
Blessings
Gmama Jane 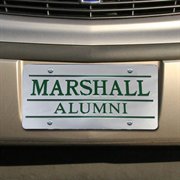